Setting the Record Straight on PCOS and Diet

If you have been diagnosed with Polycystic Ovary Syndrome (PCOS), then you are probably already well aware of the links made between PCOS and diet.

Unfortunately, the associations may often be too blunt and counter-productive to helping women alleviate the condition. You may even have been told “lose weight and you will ease the symptoms” – but this way of thinking ignores many of the complex mechanisms now known to be involved in PCOS.

PCOS is an inflammatory condition of the reproductive system that causes small cysts to appear in the ovaries, disrupting menstruation cycles and affecting fertility amongst a range of other symptoms.

Although no one is exactly sure what causes PCOS, hormone imbalances play a large part, particularly insulin resistance. As we know from Type 2 Diabetes, diet and nutrition do play a significant role in how effectively your body uses and responds to insulin.

The same applies to other hormones in your body. In fact, your endocrine system – the network of glands that produce and control the release of hormones into your body – is particularly sensitive to nutritional imbalances. Eating too much of the wrong things (or too little of the right things) can easily lead to issues with your thyroid gland, your reproductive hormones and more.

The need for a new approach

Given this relationship between nutrition and hormone health, diet can play a key role in supporting the imbalances associated with PCOS. But some of the oversimplified messaging women get is less than helpful. There’s no simple A to B route to curing PCOS. If diet and nutrition are to play a role, they need to be part of a personalised approach, with appropriate support from a qualified practitioner.

Much attention is given to weight as a cause of PCOS, but with insulin resistance being a factor, it is as likely to be a symptom of the condition.  It is understood that 70% of women with PCOS are known to be insulin resistant, which means their bodies are producing too much insulin, which therefore makes weight loss very difficult.

Getting nutrition right for PCOS

As already said, effective treatment and management of PCOS, including weight loss, requires a sensitive, personalised approach tailored to the individual needs of each patient. However, there are some general changes you can make that will set you on the right path and help you feel empowered in improving your general sense of wellbeing. Here’s where to start.

Cut down on carbs

Carbohydrates and insulin resistance don’t mix well. The carbohydrates you eat in your food get broken down into sugars, which are then absorbed into the cells of your body due to the effects of insulin.

If you are insulin resistant, this last phase doesn’t work so well. That means after eating high amounts of carbohydrates, your blood sugar levels rise and don’t have anywhere to go. Eventually, your body has no choice but to convert them to fat. Long term, you are at a high risk of developing diabetes.

Studies have shown that reducing carbohydrate intake, or even swapping carbs for unsaturated fats, can help women with PCOS better regulate insulin levels. Another option is to change the type of carbohydrate you eat. So-called lower glycemic index (GI) carbohydrate, such as those found in brown rice and wholewheat pasta, have a similar impact on insulin regulation, as they result in lower blood sugar levels.

Boost your intake of protein and healthy fats

High-protein diets have long been viewed as useful in aiding weight loss, partly because calories gained from protein are used more slowly than those from carbohydrate. This makes you feel ‘full’ for longer, because your body doesn’t release the hormones that make you feel hungry so quickly.

The same applies to fats – and somewhat counterintuitively, it has been shown that diets high in ‘healthy’ fats (i.e. unsaturated) can help speed up the loss of body fat compared to low-fat diets.

The overall message is simple – by replacing high GI carbohydrate and sugars with proteins and unsaturated fats, you increase your chances of losing weight and manage your insulin levels better. Foods like eggs, nuts and avocado are all great sources of proteins and healthy fats.

Fight inflammation with fruit and veg

As mentioned, PCOS is an inflammatory condition, which means it is brought on by the defence mechanisms in your reproductive cells reacting to something they perceive to be a threat. One theory is that high blood glucose levels are a factor, linking to the need to regulate insulin and reduce the amount of sugar and carbohydrate in your diet.

Antioxidants and polyphenols found in certain foods, especially fruits and vegetables, have a positive impact on regulating inflammatory response. Aiming to eat a diet containing foods such as olive oil, nuts and oily fish (as with the ‘Mediterranean’ diet) is likely to be beneficial for a range of inflammatory diseases.  It is a good idea to include green leafy vegetables and plenty of colourful fruits and vegetables such as peppers, beetroot, and butternut squash and strawberries, blueberries and oranges.  However, the positive impact of fruit in relation to PCOS is tempered by the fact it is high in sugars.   Aim for no more than two portions of fruit per day but try increasing the number and variety of vegetables you consume to support your body with hormone balance and balancing blood sugar. 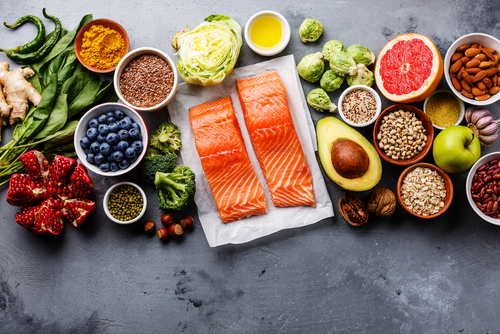 Six Superfoods to Eat During Pregnancy

What you eat has a direct impact on your health and well-being throughout your life. But during pregnancy, getting the right nutritional balance is even more important to your baby’s development.
Read More

Why Good Fertility Nutrition is More Than What You Eat

It should be no secret that good fertility and good nutrition are inextricably linked. If you are planning a pregnancy, you want your body to be in the best possible condition.
Read More

Six Superfoods to Eat During Pregnancy

What you eat has a direct impact on your health and well-being throughout your life. But during pregnancy, getting the right nutritional balance is even more important to your baby’s development.
Read More

Why Good Fertility Nutrition is More Than What You Eat

It should be no secret that good fertility and good nutrition are inextricably linked. If you are planning a pregnancy, you want your body to be in the best possible condition.
Read More